Alright, to summarize where we’re at … we learned in part 3 that God’s prophets have been proclaiming (for almost 2,000 years now!) that God purposely chose to use 7 Days in the Creation event in order to declare the time of the end from the very beginning.  And this was accomplished through the fact that each of those 7 Creation days foretold of a future 1,000 year period, for a total 7,000 year plan God had for planet Earth.  And the prophets knew the 7th Day Sabbath in the Creation story foretold of Christ’s 1,000 year Sabbath kingdom on Earth, which would arrive at Christ’s 2nd Coming Earth’s 6,000 year.  And this is where the revelation stood for the past 2,000 years.

But in AD 2008 God began to show me that it wasn’t just Day 7 in the Creation story that contained prophetic words about its future millennium, it was all 6 days before it!  Each Creation day contained a prophecy about the biggest event to occur during its respective future millennium.  So Creation Day 1 prophesied about Earth’s first 1,000 years, Creation Day 2 prophesied about Earth’s second 1,000 years, and on and on.

So we’re going to get into this revelation right now, starting with Day 1 of Creation, and I’m going to show you the words God used in that day’s events in order to secretly prophesy the fall of Adam & Eve in the Garden of Eden, which was by far the biggest event God had planned to occur during Earth’s first 1,000 years.

But first, do you remember the words Irenaeus wrote in the second century?  You read them in part 3.  He said:

“The Creation story is an account of the things formerly created, as also it is a prophecy of what is to come.”

Man, he didn’t know how right he was!  He didn’t know EACH Creation Day contained a prophecy about the biggest event to occur during its future millennium!  And yet he still wrote those words!  Amazing!

By the way, God actually confirmed this is all true with these words:

“I am God, and there is no one like me, Declaring the End from the Beginning, and from ancient times the things that are not yet done, saying, My plan will take place, for I will do all my will”  (Isaiah 46:9-10)

Wow!  Did you hear that?  So not only did God declare the time of the end from the beginning, but He’s saying He declared things that were not yet done!  He called it “from ancient times” but realize God spoke these words through Isaiah around 800 BC.  So “ancient times” in 800 BC would likely mean the Creation event.

The great John Wesley did a commentary on the Bible in the 1700’s, and he knew what Isaiah 46:10 was saying, even though He didn’t fully understand how God had done it.  He said:

“God was foretelling from the beginning of the world, future events which should happen in succeeding ages, even to the end of the world.”

Wow!  That is exactly what I’m going to reveal to you in this video series!

So let’s look at the first day of Creation and see (as John Wesley put it) the “event” that God foretold to happen during Earth’s first millennial age.  Day 1 of Creation reads like this …

1)  In the beginning God created the heaven and the earth.

3)  And God said, Let there be light: and there was light.

4)  And God saw the light, that it was good: and God divided the light from the darkness.

5)  And God called the light Day, and the darkness he called Night. And the evening and the morning were the FIRST day.

So what’s the hidden prophecy in these words?  It’s the line “God DIVIDED the LIGHT from the DARKNESS” (Genesis 1:4).  Friend, these words foretold the fall of Adam & Eve in the Garden of Eden!  Let me explain.

Do you see in the narrative God called the light “good”?  Well, by default this is like calling the darkness “evil”.  And in fact, throughout the Bible, God confirmed this analogy of light being good and darkness being evil.  Jesus said:

“And this is the condemnation, that light is come into the world, and men loved darkness rather than light, because their deeds were evil. For everyone that does evil hates the light, neither comes to the light, lest his deeds should be exposed”  (John 3:19-20)

So you see darkness is likened to evil, and light as good.  Paul wrote:

“For you were once darkness, but now are you light in the Lord: walk as children of light. For the fruit of the Spirit is in all goodness, righteousness and truth … have no fellowship with the unfruitful works of darkness, but rather reprove them”  (Ephesians 5:8-11)

See there it is again, light as good, and darkness as evil.

So looking back at the words in Genesis 1:4, where it says “God DIVIDED the Light from the Darkness” it was prophesy foretelling Good & Evil would be divided sometime during Earth’s first 1,000 years.  And friend, this is EXACTLY what happened when Adam & Eve sinned in the Garden of Eden!

The forbidden tree in the Garden was called the tree of the KNOWLEDGE of GOOD and EVIL!  God told them:

“But of the tree of the knowledge of good and evil you shall not eat, for in the day that you eat of it you shall surely die”  (Genesis 2:17)

Well they ate of it!  And they died that very day, spiritually!  And their eyes were opened, and for the first time in their lives they knew the difference between what was good (light) and what was evil (darkness).  God made this pronouncement:

Do you see it?  Good & Evil was now DIVIDED in mankind’s hearts!  They knew the difference between them!  So understand Genesis 3:22 is the fulfillment verse for what God had prophesied to happen in Genesis 1:4. 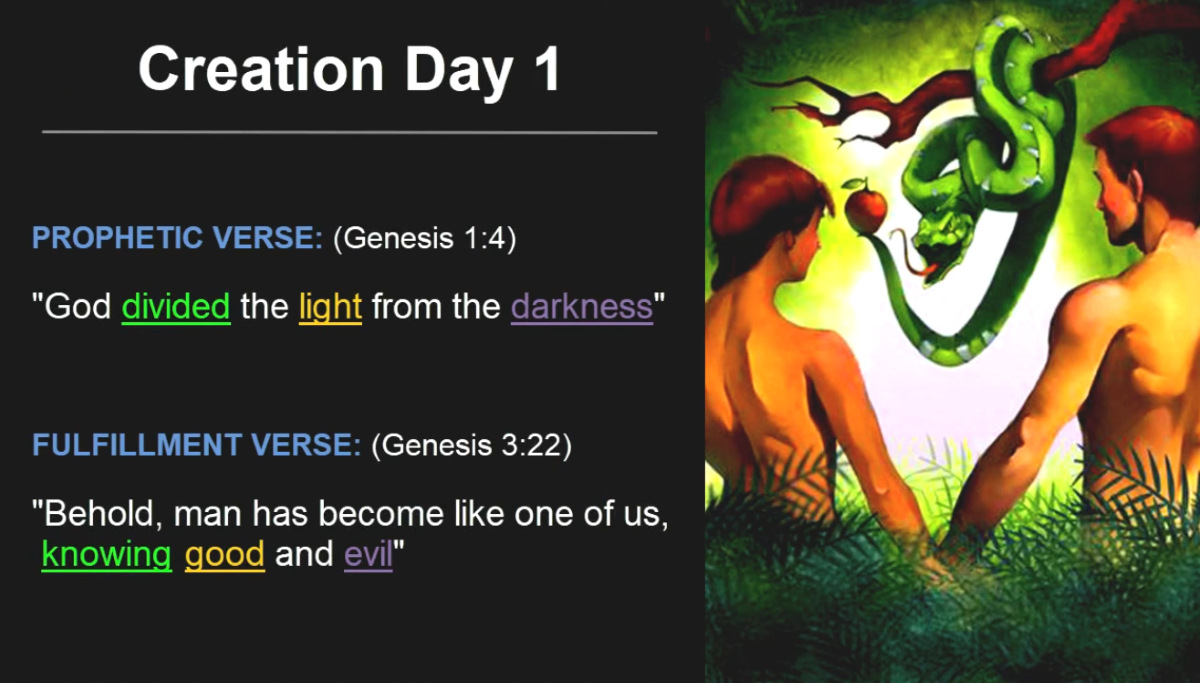 In other words, get this … when Adam & Eve sinned, Bible prophecy was already being fulfilled!  Did you hear that?  Just think, four verses into the Bible and God is already prophesying!  It’s shocking!  And if you’d do a careful study of the prophetic verses Christ fulfilled during his first Coming, you’d see what I’m telling you about Genesis 1:4 is the truth.  You’d see it’s just like God’s other prophetic words in Scripture.  For He moves in and out of prophecy so quickly and smoothly that it’s breath-taking!

By the way, if you just think about light & darkness in the physical sense (like what God was literally creating on Day 1 of Creation) it really makes no sense to have to say “God DIVIDED the light from the darkness”.  Think about it, where there’s light it just naturally expels the darkness.  They don’t need to be divided, it just happens!  Turn on a lamp in a dark room … and boom! … the light instantly pushes back the darkness and fills the room.  So saying God “DIVIDED the light from the darkness” appears like a throwaway line.  It really doesn’t make much sense physically.

In other words, you could remove that line from Creation Day 1’s narrative and everything makes sense without it … “And God said, let there be light: and there was light. And God called the light day, and the darkness he called night. And the evening and the morning were the first day” (Genesis 1:3-5).  Makes perfect sense!

But listen, when you understand God wanted to PROPHESY “things that were not yet done” from the beginning of time … then the line takes on a whole new meaning and significance!  I am telling you the truth, the words “God divided the light from the darkness” in Creation Day 1’s narrative were secret prophesy about the biggest event to occur during Earth’s first 1,000 years – the fall of mankind into sin and its resulting death!

SETUP COMPLETE TO GAME OF LIFE

Remember the guy who asked me, “Come on Gabriel, why would God put a poisoned tree in the Garden of Eden, setting us up for failure?”  Well now you know!  It was to set up the option (or the choice) for mankind to now either LOSE or WIN the Game of Life!  It’s that simple!  It’s just like I told you in part 2 of this series – it’s ALL about a game!

Ok, so now you know WHY God prophesied the fall of mankind in Day 1 of Creation.  He knew it was going to happen during earth’s first 1,000 years!  He needed it to happen to finish the set up to His Game of Life!  It’s like we read earlier in Isaiah 46:10 “God’s PLAN will take place (which means He has a plan!) for He will do all His will.”  Amen to that.

Alright, so there’s one last thing I want to tell you, just briefly here in chapter 4, because most people don’t understand this (even church people!).  And yet it’s REALLY important to know!  When Adam & Eve learned the difference between Good and Evil, what it actually means is they learned the 10 Love Commandments (10LC)!  This is a powerful revelation!  ALL “goodness” is defined by “obedience to the 10LC, and ALL “evil” is defined by disobedience to the 10LC.  It’s that simple.  So Adam & Eve learned (knew) the 10LC the moment they ate from the tree of the knowledge of good and evil.  How cool is that?

If you read my book Undeniable Biblical Proof Jesus Christ Will Return to Planet Earth Exactly 2,000 Years After the Year of His Death you’ll notice I point out story after story in the book of Genesis proving mankind knew the 10LC long before God wrote them on stone tables at Mt Sinai.  Mankind has always known them!  They are the ONLY difference between what is good & what is evil!

Good gives, evil steals.  Good forgives, evil hates.  Good is content, evil covets.  And on and on with them.  Visit our website www.10LoveCommandments.com and you can learn all about the 10LC and how they are the COMPLETE LIST of ALL good & evil thoughts, words, and deeds.

So that’s all I’m going to say about that for now, but just realize, God has been perfectly fair to all mankind from the very beginning of time, for He supplied them with the ONLY KNOWLEDGE they needed to know to win the Game of Life (meaning obtain eternal life) – namely, follow the path of good (keep 10LC) and shun the path of evil.  And The Salvation Equation video series on our www.10LoveCommandments.com website will really help you understand all of this.

Alright, so to sum up where we’re at … we now know God prophesied the fall of Adam & Eve in Day 1 of Creation, and this event was fulfilled during earth’s 1st millennium, likely year 1.  And we know God prophesied of Christ’s soon-coming restful and holy Sabbath Kingdom in Day 7 of the Creation story, which will be fulfilled during Earth’s 7th millennium.  So next we’re going to reveal God’s secret prophetic words in Day 2 of Creation foretelling the greatest event He had planned to occur during Earth’s 2nd millennium!  Keep reading! 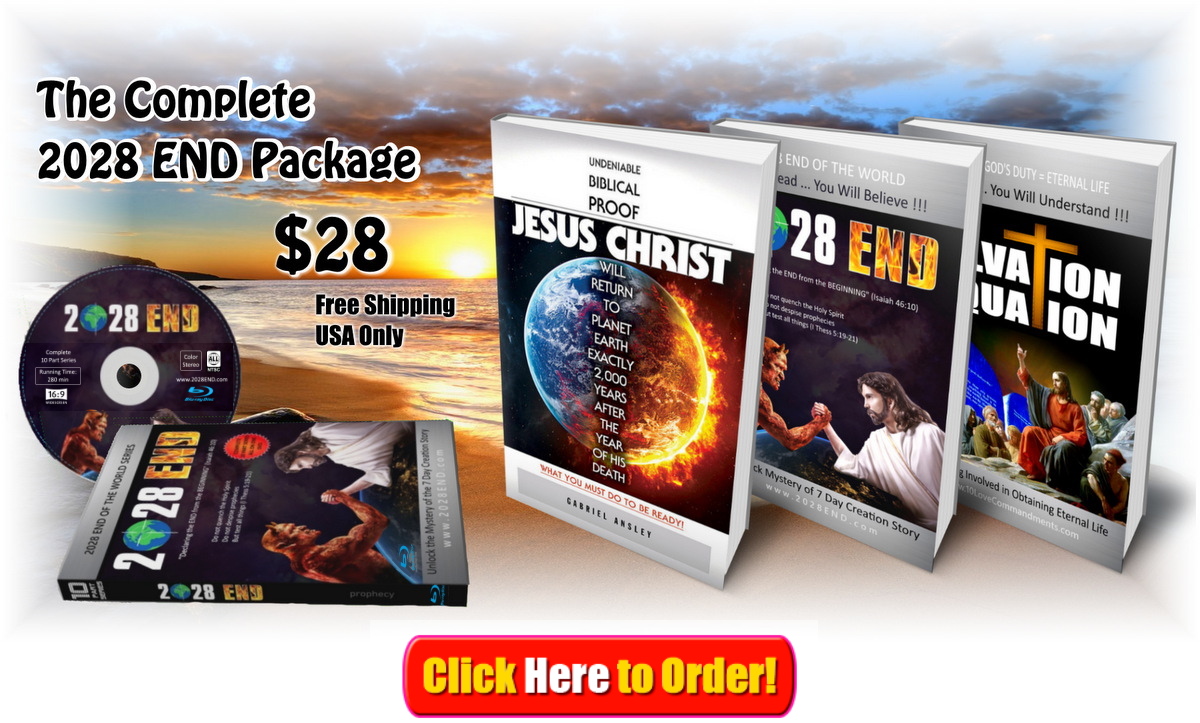