“Blessed and holy is he that has part in the FIRST RESURRECTION: on such the second death has no power.” (Revelation 20:6)

I began to grow concerned about the economic crash that I had heard was coming upon the world.  People were being advised by the economists to buy as much gold as they could and this concerned me because I didn’t have much money.  I was 66 years old, a returning ex-pat to the UK, and I didn’t want to lose what God had given me, so I asked Him whether I should buy gold coins with His money.  That night, on the 14 October 2014 He gave me 2 dreams; one was a visionary dream and the other a normal parabolic dream.

God has always spoken to me … mostly in parable dreams, sometimes in His Word, and only once did I hear His soft, sweet, audible voice behind me say, “Eat Spiritual Food.”

A Description of My Dream

In the visionary dream during the night of 14th October 2014, I was taken in the Spirit high above the earth and found myself looking at a very sad faced angel; she was looking downwards upon the earth.  She had a golden shine about her and beautiful curly long hair drawn back in a plait.  It was impressed upon me that her sadness was unbelievably great.  Then I heard her say sadly, “In two weeks He will be resurrected.”  Then I woke up.

I lay in bed thinking that perhaps someone is going to die, but then I soon began to ponder on Daniel’s 70 weeks.  I dozed off and was given another dream. 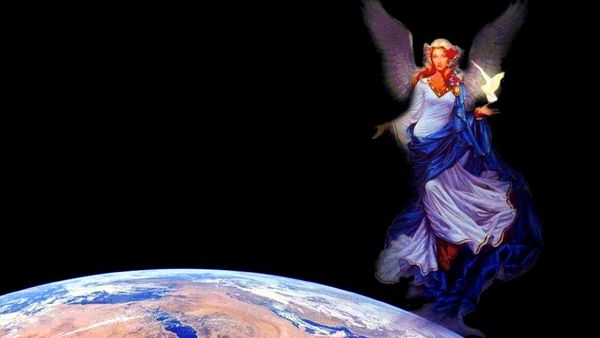 The meaning of the visionary dream only came to me some days later when the Holy Spirit impressed upon me that Daniel’s days were years.  So I calculated that 2 weeks = 14 days = 14 years.  Consequently, 2014 + 14 years = 2028.  I still didn’t dare believe that God would send an angel to tell me that Jesus would be resurrected again in 2028.  I told someone who made no comment on it, so I kept it to myself for 7 months.  Then God led me to this “2028 END” website.  I was so happy I wanted to shout it out to the world!  Because now I knew/know my dream’s interpretation to be true, and I can go out and let people know.

I would also like to add that I just learned here in June 2015 that the night of my visionary dream back on 14th October 2014, Sukkot (Feast of Tabernacles) began on the evening of 08th October and ended the evening of 15th October.  Therefore, the 14th October was the 7th day of Sukkot, which is known as the day of ”Great Salvation” and closes the period of Divine Judgment begun on Rosh Hashannah (Feast of Trumpets).

Brothers and sisters, we have no idea when we will die, so let us keep on running with our eyes fixed upon Jesus; let us be perfect/complete in Him.

May Jesus bless you,

Email Conversation between Abigail & Gabriel, reprinted here to aid your belief in her visionary dream:

Thanks for getting that (your) testimony to me so quick. I’ve worked on coding it into a webpage today, but have not made it live online yet. I got a couple of questions for you, first …

Let me know your thoughts on all that. : )

The next day Abigail wrote back:

In answer to your first question, I took ‘the resurrection’ to mean His second and last coming that occurs after the Great tribulation as in Mathew 24:31

“And He shall send His angels with a great sound of the trumpet and they shall gather together His elect from the four winds and from one end of Heaven to the other”.

I believe He was the first fruits of the first resurrection and then His holy, pure and unblemished saints that are left alive on the earth will be gathered with Him at the second resurrection …

These are beautiful passages that confirm Christ lives inside of each believer, which like you said, those who are alive and remain during His Second Coming will be lifted up into the air (resurrected), which really means it is Christ who is being resurrected! How beautiful! What a beautiful way for the angel to express that …

Wow, thanks for giving me more light on the visionary dream! I hadn’t thought of us as being one with Christ; rising with Him in us; and so ”we shall ever be with the Lord”. Isn’t it wonderful to be able to enlighten and also exhort one another in the Truth …

I have no doubt Abigail is telling the truth about her visionary dream.  Why?  Because she didn’t realize the oddity of the angel’s words.  If someone was making this up, I’m sure they would have said the angel said “Christ will return in two weeks” or “Christ is coming back in two weeks”.  But who would have thought of saying “HE (CHRIST) will be RESURRECTED in two weeks”.  Odd!  I recognized it the moment I read Abigail’s first email to me about her encounter, for instantly the Lord brought Christ’s words in John’s gospel across my mind and explained the angel’s words to me.

Yes, without a doubt, the angel in Abigail’s dream knew righteous people still lived on Earth, those with Christ’s loving spirit in their hearts.  But she was sad to know that in two weeks time (or 14 years … from the Fall Feasts of 2014 to the Fall Feasts of 2028) they would be resurrected up into the air to safety with the Lord, while simultaneously a world of ungodly, beast-marked people would perish in a global flood of fire!

This is no joke, folks!  God is warning us all He possibly can in these very last of days!  God help us to find the courage to clean up our lives before the end for each of us arrives!