“Let the waters under the heavenbe GATHERED TOGETHER unto one place,and let the DRY LAND Appear.”(Genesis 1:9-13)

In God’s Master Plan for planet Earth the most important event to occur during Earth’s third 1,000 year period (year 2,000 – 3,000) was the Israelites deliverance event at the Red Sea.  Moses was born year 2,558 and 80 years later (year 2,638) God parted the Red Sea.  But here’s the AMAZING truth … the story of God delivering the Israelites out of bondage to Pharaoh was a prophetic parable about God delivering mankind’s souls out of bondage to Satan.

In the story, Moses foreshadowed Jesus.  As Moses “stretched out his arms” in front of the Red Sea, it was a picture of Jesus “stretching out his arms” on the cross.  The Red Sea parting (opening a way to the Promise Land) was a picture of the Temple Veil parting (opening a way to Heaven).  The destruction of the enemy Pharaoh & his army (who held the “power of death” over the Israelites) in the Red Sea was a picture of the destruction of our enemy Satan & his demons (who held the “power of death” over mankind’s souls) in Christ’s red blood.  And God delivered the Israelites out of bondage after 400 years to foretell He would deliver mankind’s souls out of bondage after 4,000 years.  Yes, Jesus Christ DIED on the cross at the end of Earth’s 4th millennium (year 4,000) in perfect fulfillment of the story of Moses!

And how did God foretell of this momentous event in the third day of Creation?  It’s in these words: “And God said, Let the waters under the heaven be gathered together unto one place, and let the dry land appear” (Genesis 1:9).  And this is precisely what happened at the Red Sea, a strong east wind blew “gathering the waters together” (Exodus 15:8), until the “dry land appeared” (Exodus 14:21-22). 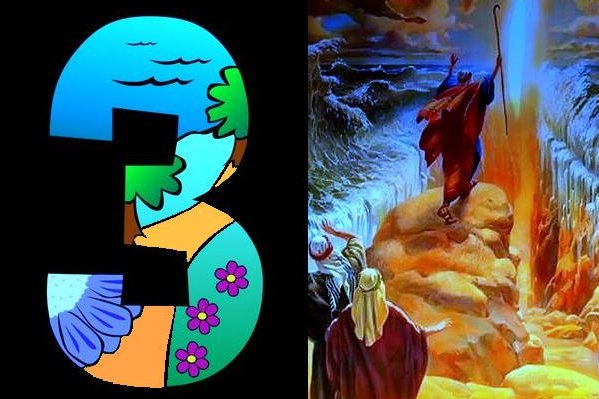 9. And God said, Let the waters under the heaven be gathered together unto one place, and let the dry land appear: and it was so.

10. And God called the dry land Earth; and the gathering together of the waters called he Seas: and God saw that it was good.

11. And God said, Let the earth bring forth grass, the herb yielding seed, and the fruit tree yielding fruit after his kind, whose seed is in itself, upon the earth: and it was so.

12. And the earth brought forth grass, and herb yielding seed after his kind, and the tree yielding fruit, whose seed was in itself, after his kind: and God saw that it was good.

And Moses stretched out his hand over the sea; and the Lord caused the sea to go back by a strong east wind all that night, and made the sea dry land, and the waters were divided.  And the children of Israel went into the midst of the sea upon the dry ground: and the waters were a wall unto them on their right hand, and on their left.  (Exodus 14:21-22)

And with the blast of thy nostrils the waters were gathered together, the floods stood upright as an heap, and the depths were congealed in the heart of the sea.  (Exodus 15:8)

By the word of the Lord were the heavens made; and all the host of them by the breath of his mouth.  He gathereth the waters of the sea together as an heap: he layeth up the depth in storehouses.  Let all the earth fear the Lord: let all the inhabitants of the world stand in awe of him.  For he spake, and it was done; he commanded, and it stood fast.  (Psalms 33:6-9)