In God’s 7,000 year master plan for planet Earth the most important event to occur during Earth’s seventh 1,000 year period (6,000 – 7,000) will be the millennial reign of Jesus Christ with all the resurrected saints.

This period will begin immediately after Christ’s return year 6,000, when Satan is locked up in the bottomless pit.  It will be 1,000 years of rest and holiness on Earth.  Mankind will no longer know war, disease, and pain.  Hallelujah!  Love will fill their hearts:

“Blessed and holy is he that hath part in the first resurrection: on such the second death hath no power, but they shall be priests of God and of Christ, and shall reign with him a thousand years.” (Revelation 20:6)

“There remaineth therefore a rest to the people of God.  For he that is entered into his rest, he also hath ceased from his own works, as God did from his.  Let us labour therefore to enter into that rest.” (Hebrews 4:9-11)

So how did God foretell of this wondrous time in the seventh day of Creation?  It’s in these words:

To sanctify something means to “set it apart as holy”.  In other words, holiness will reign during Earth’s seventh millennium.  Just as God ended his work and rested on the seventh day, so too mankind and planet Earth will rest from the sin that has so long plagued it.  Yes, after 6,000 long years … it will FINALLY be the BLESSED SABBATH!  Hallelujah!  Oh, what a glorious time it will be! 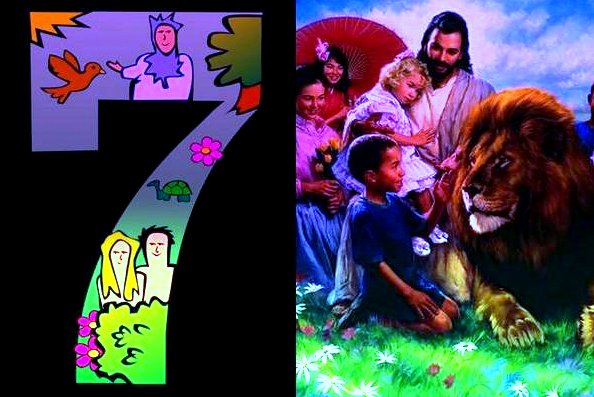 There’s a verse in the book of Job saying, “He shall deliver thee in six troubles: yea, in seven there shall no evil touch thee”.  These words are prophecy, foretelling mankind will be in trouble for 6 millenniums, needing the Lord to deliver them, but in the 7th millennium Satan will be locked up in the bottomless pit, and no evil shall touch them! (Job 5:19)

Thus the heavens and the earth were finished, and all the host of them.

And God blessed the seventh day, and sanctified it: because that in it he had rested from all his work which God created and made.(Genesis 2:1-3)

God’s promise of entering his rest still stands, so we ought to tremble with fear that some of you might fail to experience it.  For this good news — that God has prepared this rest — has been announced to us just as it was to them.  But it did them no good because they didn’t share the faith of those who listened to (obeyed) God.  For only we who believe (obey) can enter his rest.  As for the others, God said, “In my anger I took an oath: ‘They will never enter my place of rest,’” even though this rest has been ready since he made the world.  We know it is ready because of the place in the Scriptures where it mentions the seventh day: “On the seventh day God rested from all his work.”  So God’s rest is there for people to enter, but those who first heard this good news failed to enter because they disobeyed God … So there is a special rest (Sabbath) still waiting for the people of God.  For all who have entered into God’s rest have rested from their labors, just as God did after creating the world.  So let us do our best to enter that rest.  But if we disobey God, as the people of Israel did, we will fail.(Hebrews 4:1-11)

Here is the patience of the saints: here are they that keep the commandments of God, and the faith of Jesus.  And I heard a voice from heaven saying unto me, Write, Blessed are the dead which die in the Lord from henceforth: Yea, saith the Spirit, that they may rest from their labours; and their works do follow them.(Revelation 14:12-13)

After those days, says the LORD, I will put my law in their inward parts, and write it in their hearts; and I will be their God, and they shall be my people.  And they shall teach no more every man his neighbor, and every man his brother, saying, “Know the LORD”: for they shall all know me, from the least of them unto the greatest of them, says the LORD: for I will forgive their iniquity, and I will remember their sin no more.(Jeremiah 31:33-34)

The wolf shall dwell with the lamb, and the leopard shall lie down with the goat; and the calf and the young lion and the fatling together; and a little child shall lead them.(Isaiah 11:6)