Fifty days after Christ’s resurrection came the Feast of Weeks, which is known in the Greek as “Pentecost” meaning “50”.  It was on this day (in fulfillment of the Feast) that God first poured out the Holy Ghost, with the evidence of speaking in other tongues, on the believers gathered in the Upper Room in Jerusalem.

“If any man thirst, let him come unto me, and drink.  He that believeth on me, as the Scripture hath said, out of his belly shall flow rivers of living water.  But this spake he of the Spirit, which they that believe on him should receive: for the Holy Ghost was not yet given; because that Jesus was not yet glorified.” (John 7:37-39)

So how did God foretell the coming of the Holy Ghost in the fifth day of Creation?  It’s in these words:

“And God said, Let the waters bring forth abundantly the moving creature that hath life.” (Genesis 1:20)

See, the water is now sustaining life!  But not only that, it’s abundant life!  This is a precise picture of how the Holy Ghost, the water of life, gives eternal life to a believer, just as Jesus said! 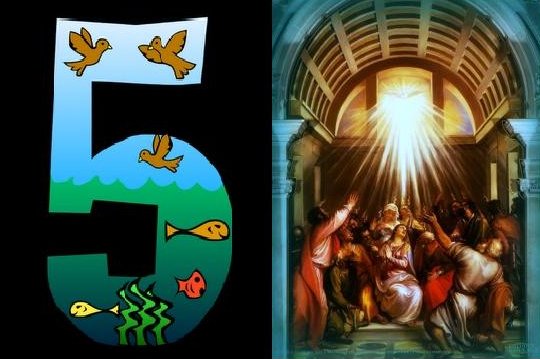 The Apostle Paul found some disciples in Ephesus, who had been baptized by John the Baptist, and asked, “Have ye received the Holy Ghost since ye believed?”  They didn’t know what he was talking about.  So he told them about Jesus, laid his hands on them, and immediately they received the Holy Ghost, speaking in other tongues and prophesying. (Acts 19:1-7)

And God said, Let the waters bring forth abundantly the moving creature that hath life, and fowl that may fly above the earth in the open firmament of heaven.

And God created great whales, and every living creature that moveth, which the waters brought forth abundantly, after their kind, and every winged fowl after his kind: and God saw that it was good.

And God blessed them, saying, Be fruitful, and multiply, and fill the waters in the seas, and let fowl multiply in the earth.

And the evening and the morning were the Fifth Day.(Genesis 1:20-23)

Jesus answered and said to her, “If you knew the gift of God, and who it is who says to you, ‘Give Me a drink,’ you would have asked Him, and He would have given you living water.”  The woman said to Him, “Sir, You have nothing to draw with, and the well is deep.  Where then do You get that living water?  Are You greater than our father Jacob, who gave us the well, and drank from it himself, as well as his sons and his livestock?”  Jesus answered and said to her, “Whoever drinks of this water will thirst again, but whoever drinks of the water that I shall give him will never thirst.  But the water that I shall give him will become in him a fountain of water springing up into everlasting life.(John 4:7-14)

On the last day, that great day of the feast, Jesus stood and cried out, saying, “If anyone thirsts, let him come to Me and drink.  He who believes in me, as the Scripture has said, out of his heart will flow rivers of living water.”  But this He spoke concerning the Spirit, whom those believing in Him would receive; for the Holy Spirit was not yet given, because Jesus was not yet glorified.(John 7:37-39)