“Let there be a SKY in the MIDST of the WATERS,and let it divide the waters from the waters”(Genesis 1:6-8)

“In the six hundredth year of Noah’s life … all the fountains of the great deep burst forth, and the floodgates of the heavens were opened. And the rain fell upon the earth for forty days and forty nights.” (Genesis 7:11-12)

So how did God foretell of this momentous event in the second day of Creation?  It’s in these words:

“And God said, Let there be a firmament (sky) in the midst of the waters, and let it divide the waters from the waters.” (Genesis 1:6)

Before the flood of Noah’s day the sky had never seen rain, the Earth was watered by a mist coming up from the ground.  But at the time of the flood the “fountains of the deep broke open” and spewed water high into the air which fell as rain.  Consequently, the sky surrounding planet Earth was “in the midst of the waters” for the first time ever during Noah’s Flood.  And afterward, Earth’s water was divided by the clouds above and oceans beneath.

But why was the global flood event so important to God?  Because the shocking truth is this … the story of Noah, the Ark, and the destructive worldwide flood is a prophetic parable concerning Christ’s Second Coming!  In other words, the story of Noah and the flood is unfulfilled prophecy, soon to be fulfilled!

Then, when Noah was 600 years old, his family entered the Ark, and the story says God shut the door.  Likewise, God will shut the door to salvation on the day Christ returns Earth’s 6,000 year. 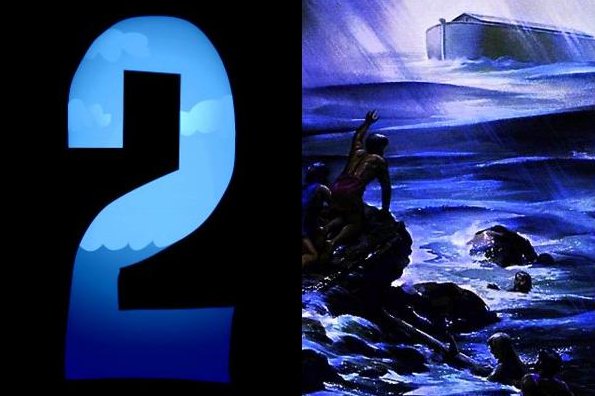 And God said, Let there be a firmament (sky) in the midst of the waters, and let it divide the waters from the waters.

And God called the firmament (sky) Heaven. And the evening and the morning were the Second Day.(Genesis 1:6-8)

In the six hundredth year of Noah’s life, on the seventeenth day of the second month — on that day all the springs of the great deep burst forth, and the floodgates of the heavens were opened.  And rain fell on the earth forty days and forty nights … For forty days the flood kept coming on the earth, and as the waters increased they lifted the ark high above the earth.  The waters rose and increased greatly on the earth, and the ark floated on the surface of the water.  They rose greatly on the earth, and all the high mountains under the entire heavens were covered.  The waters rose and covered the mountains to a depth of more than fifteen cubits.(Genesis 7:11-12, 17-20)

But they deliberately forget that long ago by God’s word the heavens came into being and the earth was formed out of water and by water.  By these waters also the world of that time was deluged and destroyed.  By the same word the present heavens and earth are reserved for fire, being kept for the day of judgment and destruction of the ungodly.(II Peter 3:5-7)