Alright, folks, so here’s another fascinating “2028 END” confirmation God did to confirm Jesus Christ’s return in the year AD 2028.  This one involves the book God had me write back in AD 2008, titled “Undeniable Biblical Proof Jesus Christ Will Return to Planet Earth Exactly 2,000 Years After the Year of His Death”.

God did this confirmation using the printed paperback books and the way they were packaged.  And let me say this right out of the gate … God hid this confirmation from me for 9 years!  He kept it a secret!  I had no idea He had done what I’m about to tell you until late 2018, when He revealed it to me.

So here’s what happened: Back in 2009, when I had finished writing the book’s manuscript, the Lord laid it on my heart to print 5,000 copies of the book and store them here at my apartment.  So that’s what I did.

I didn’t know how the books would be packaged (meaning how many books per box), but when they arrived January 2010, I saw there were 20 books per box, and the shipping weight was listed on the outside of the box.  It said 26 lbs as you can see in the picture.  So that was that, I never thought anything else about it. 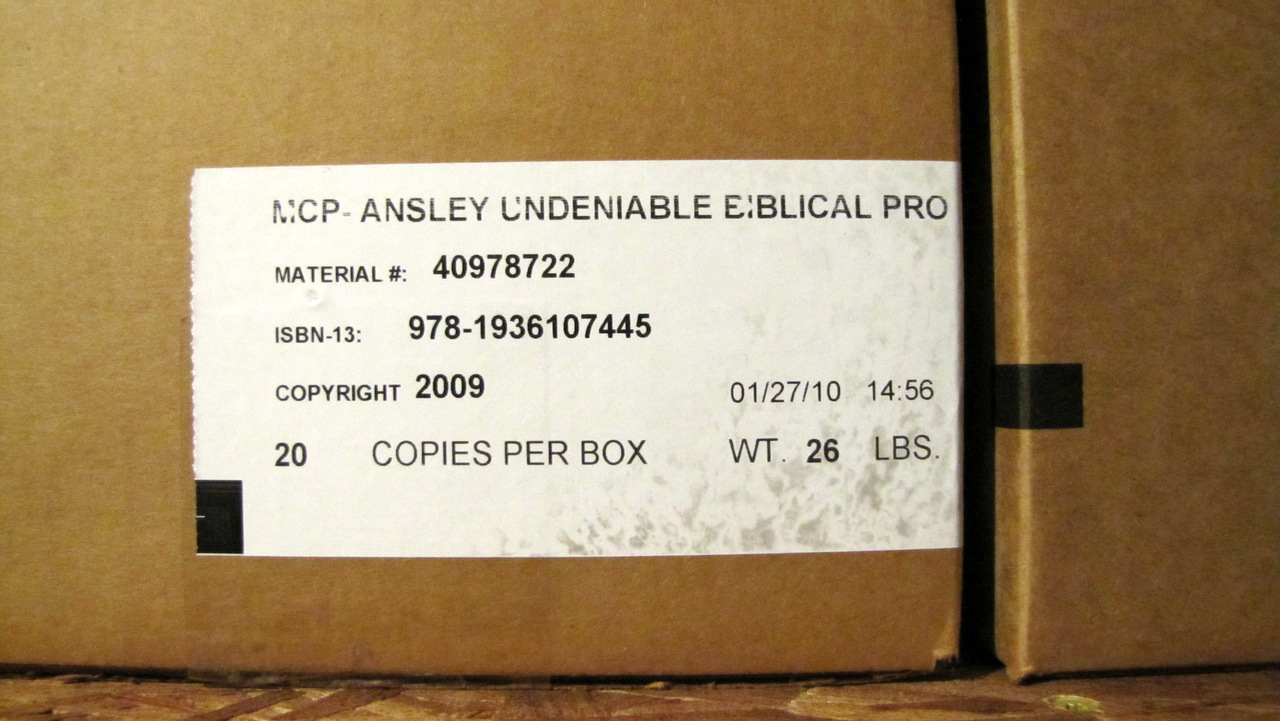 Well, late last year (2018) something was impressing upon me to take the box of books to the post office and weigh it.  This was around the same time I learned God had controlled our 10 part “2028 END” video series to be exactly 280 minutes, and that the first verse of the Bible contained 28 letters (God declared the end from the beginning). 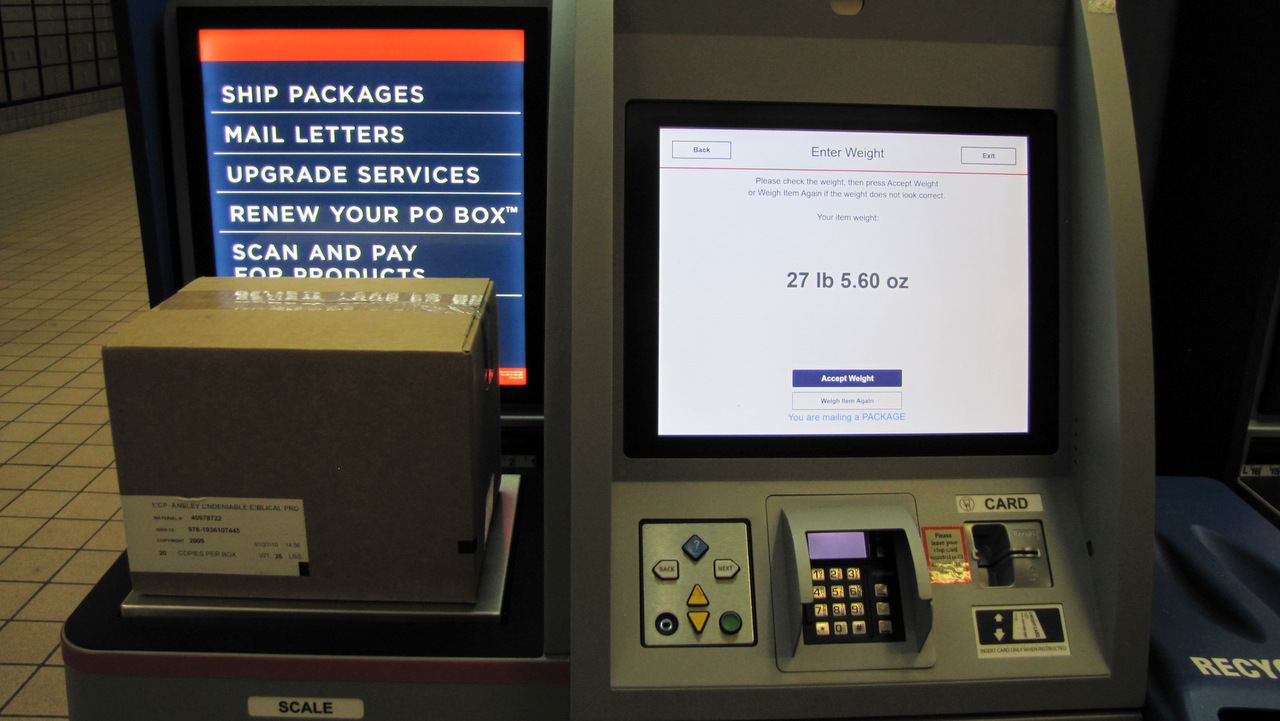 WHY DID THIS HAPPEN?

All I can figure is the 5,000 books were shipped via freight mail.  The boxes arrived on skids, wrapped in plastic, in downtown Nashville at some trucking company.  My friend and I had to go down there in his pickup truck to pick them up.  They loaded the skids on his flat bed trailer and we brought them home.

I’m guessing because of the HUGE shipping weights involved, freight mail doesn’t care that much about being perfectly accurate.  The 5000 books weighed over 6000 lbs!  So the shipping company is making its money regardless, no need to be perfectly precise like when you ship a small box at the Post Office.

But now being extremely curious about it all … I actually took the 20 books out of the box at the Post Office and weighed them separately.  As you can see in the picture below, the 20 books weighed 26 lbs 5.2 oz.  So even the 20 books alone were over 26 lbs. 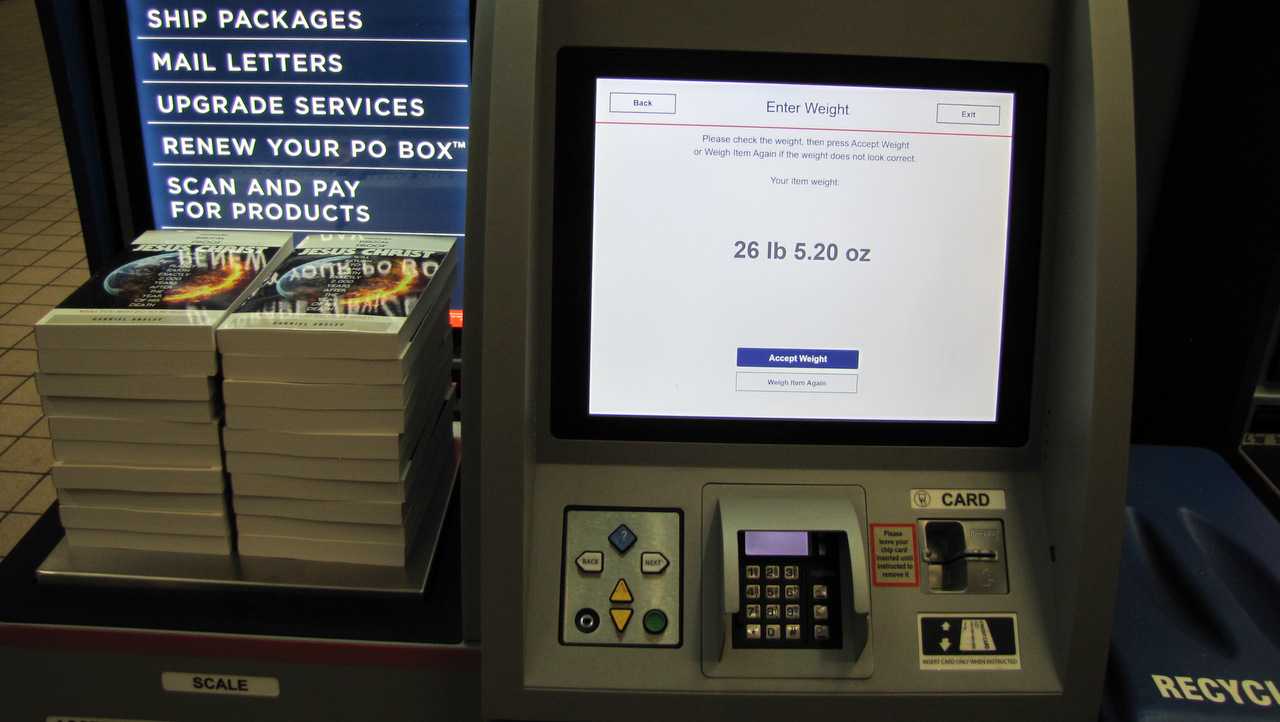 So if I had written a little less or a little more, then the books would contain a different amount of paper, and the weight of the books would be either less than 27 lbs or over 28 lbs.  And then this 20-28 confirmation wouldn’t exist!!!  And of course, the books didn’t need to arrive 20 books per box!  Why not 25 or 30 books per box?  Then again, this 20-28 confirmation wouldn’t exist.

But no!  I was led of God to write exactly what I did, so that just enough paper was used per book, so that when the books arrived packaged 20 books per box, the shipping weight is 28 lbs!  Friend, that’s mind-boggling to me!  Everything had to be just right!  And then God keeps this a secret from me for 9 years, because they wrote the wrong weight on the outside of the box!  Stunning!!!

Friend, I don’t understand how God controls these things.  God led me to prophesy throughout the UBP book the Lord’s return in 2028 (2028 END), and then He packages the books 20 books per box, with a shipping weight of 28 lbs.  How’s that possible?  What’s God doing?

All I can say is … I absolutely know Jesus Christ is going to return to this planet in the year AD 2028, which will be the 2,000 year after the year of His death, just as the cover of the UBP book proclaims.

Let me explain one last thing to you, just in case in your wondering … I’ve shipped the UBP box of 20 books before (in the past 9 years), but whenever I did I always packaged it inside of another box, usually using wood and whatever else to protect the box of books inside.  I didn’t want the box of books getting damaged.

So the shipping weight was always over 30 lbs, and I never really thought anything more about it.  That’s how God was able to keep this “2028 END” confirmation a secret from me!  He kept me from weighing the ACTUAL box for the last 9 years, because I was concerned about it getting damaged if I sent the boxs as is.  Amazing, huh?  And it wasn’t until last year (2018) that I weighed it alone.