“The dream was DOUBLED unto Pharaoh TWICE;it is because the thing is established by God,and God will shortly bring it to pass”(Genesis 41:32)

On Febuary 5, 2017 God miraculously controlled the circumstances of American Football Super Bowl LI to confirm the end is coming in the year AD 2028.  The game was watched by over 1/3 of all Americans, over 100 million people.  So with this massive American audience tuned in, God unsuspectingly — but marvelously! — foretold 2028 END.

The reason God controlled a football game to confirm “2028 END” is because back in AD 2008, while writing my book “Undeniable Biblical Proof Jesus Christ Will Return to Planet Earth Exactly 2,000 Years After the Year of His Death” God led (inspired) me to compare the Game of Life to the game of football.  Listen to what I wrote on page 50:

You might ask; how does God receive pleasure from the things He created?  The answer is because He set up creation like a game!!!  I will explain with an analogy: It is like mankind “creating” the game of football for his pleasure.  The game has a playing field, a beginning and ending time, rules, and players that can win or lose.  As mankind watches a football game being played, he receives great enjoyment out of it.  Every detail of every play is fun to watch.  Pleasure is manifested by spirits screaming, chanting, crying, and shouting as they root on who they want to win!  Do you understand?  This is a picture of God’s excitement, rooting us on to win in the Game of Life He created.  Jesus said, “I say unto you there is JOY in the presence of the angels of God over one sinner that REPENTETH” (Luke 15:10).  Yes, friend, God is receiving great pleasure from His Creation.  (pg 50)

Friend, the stakes in the Game of Life are extremely high: Your priceless soul’s ETERNAL destiny is on the line!  And the Game is almost over!!!  Year 6,000 is fast approaching with the return of Jesus Christ to planet Earth and the setting up of his 1,000 year Earthly Sabbath reign.  If the first 6000 years of mankind’s history were equated to a 60 minute football game, approximately 12 seconds would be left on the clock till Christ’s return at the writing of this book in AD 2008.  That is how late it is!  (pg 75/76)

Friend, it is ONLY because of what God had me write in my 2008 book above — comparing the Game of Life (6,000 years) to a game of football (60 minutes) — that what I’m about to tell you about Super Bowl 51 is relevant!  So pay attention!

But before we talk about Super Bowl LI, I want you to understand this is NOT the first time God did this, meaning use a high-profile football game to deliver a message!  He did it first in 2012 — 4 years after I wrote my book! — in the famous John 3:16 Game.

This was a first round playoff game between the Denver Broncos & Pittsburgh Steelers, where Denver’s quarterback Tim Tebow was miraculously used by God to deliver the message of John 3:16 to the world.  Listen to Tebow tell what happened …

Did you catch that?  In the playoff game, January 8, 2012, Tebow threw for exactly 316 yards on just 10 completions, for an average of 31.6 yards per catch.  The stat was so obvious to everyone, immediately, that it caused “John 3:16” to become the number one Google search over the next 24 hrs, well over 100 million people!  Amazing!

But later, more stats and figures relating to 3:16 were found in the game: The Steelers total time of offensive possession was 31 minutes and 6 seconds, the only interception of the game was thrown on a 3rd down play with 16 yards to go, the Neilsen ratings for the game peaked at 31.6, and more.  It was obvious God miraculously controlled this game to remind the American’s of the message in John 3:16.

Alright, so now that you know God controlled a high-profile football game to deliver a message — 4 years after I wrote my book! — let’s skip ahead to Feb 5, 2017, and talk about the biggest football game of the year, the Super Bowl.  And I’m going to show you the miraculous way God declared the End is coming in 2028 through that game!

The first thing to understand is this … it was another miracle game!  Friend, God LOVES doing miracles!  He does miracles to PROVE He did it!  It’s so you would believe!  So in the game the Patriots got behind by a score of 28 – 3 late into the 3rd quarter.  I mean it was over.  In the video I uploaded the day after the game, I talk about how at that time I went to get a bath.  What was the point in watching?  The game was over.  The Patriots couldn’t stop Atlanta’s offense, and they couldn’t do anything with their own.  It looked like the game was going to end about 42 to 10.  That would have been my guess.

But laying in the tub, a question formed in my mind … because I knew God had been using the number “28” to prophesy the time of the end.  And I knew the Falcon’s had a 28 on the board — remember, it was 28 – 3 at the time.  So I wondered, “God, are you going to use this game to tell of the end in 2028?”  But just as soon as the question formed in my mind, I swept it away as a crazy thought!  That was impossible!  Atlanta was easily going to score again, and the Patriots were never going to get to 28, so there’d be no 28’s at the end of this game.

Well, long story short, the impossible happened … the 60 minute game ended in a tie score of 28 to 28!!!!  It was unbelievable!  It was a miracle!!!  Two number 28’s were sitting there on the board at the close of the 60 minute football game.

Then God instantly spoke to me, “Son, when I speak something twice, it means it’s a SURE thing!  A football game ends after 60 minutes, like my Game of Life ends after 6,000 years, just as I led you to write in your book.  Therefore, those TWO 28’s at the end of the 60 minute Super Bowl are saying the Game of Life will surely end 2028!”  Wow!

“And for that the dream was doubled unto Pharaoh twice; it is because the thing is established by God, and God will shortly bring it to pass.”  (Genesis 41:32)

So that’s what I had from God.  I knew He had spoken to me, so I uploaded my video about it the next day (watch video below).  But at the time, I had no clue what all God had done!  Remember how God did other things in Tebow’s John 3:16 game to prove He was behind it?  Well, within several months, I knew the rest of the stunning story!

So here now is what else God did in Super Bowl LI.  For almost 20 minutes the score of the game was 20-28, literally written in that order on the TV screen (See here).  The Patriots score was first (on the left a 20) followed by the Falcons score of 28.  It was right there for all the world to see (20-28) as the miracle game was coming to an end and had a massive audience!  I was back watching at this time!  Now think, the score could have been written the other way (28-20), Falcons score followed by the Patriots, and then what I’m telling you wouldn’t be true.  But nope, Patriots score was first followed by the Falcons (20-28).

And then there’s this … the touchdown drive that made the score 20-28 took the Patriots 2 minutes and 28 seconds (See here).  Oh, but it gets better … James White, the guy that scored the two point conversion on that touchdown, which officially made the score 2028 … Guess what his jersey number is?  #28 !!! (See here).  So number “28” scored the two point conversion that made the game 20-28.  Are you following this?  Oh, but there’s more!

In the final minute of the game, the patriots scored another touchdown and two point conversion to tie the game at 28 – 28.  Guess who scored that final touchdown?  Number “28” James White (See here).  There’s more … in overtime, the Patriots won the coin toss and got the ball first, and they went right down the field and scored the winning touchtown.  Guess who scored that winning touchdown?  Yeah, James White (#28) (See here).  Guys, James White was almost unknown before the game, and now he was out there running around like a superhero, practically doing it all.  Number “28” was ruling and winning the game!

Then there’s this … Tom Brady threw for 466 yards in the game — a Super Bowl record! — and with all those yards passing, guess what his longest throw was?  Yup … 28 yards (See here).  Oh, and guess who caught that pass?  Yeah, James White (#28).  Listen, James White did SO MUCH in this game (to win it) that even Tom Brady said afterward that he deserved the MVP truck award.

Now for Brady to say something like that – the greatest quarterback ever! – that tells you how much James White (#28) did in this game.  He led the team with 14 catches — a superbowl record! — for 110 yards (See here).  He almost led the team in rushing with 29 yards on 6 carries.  But LeGarrette Blount got that honor with 31 yards on 11 carries.  And guess what that averages too?  2.8 yards a rush (See here).  Listen to Tom Brady talk about James White after the game …

Tom Brady’s longest throw was only 28 yards – from a Super Bowl record 466 yards passing! – and it was caught by #28 James White.  The patriots leading rusher averaged 2.8 yards a rush.  Wow! 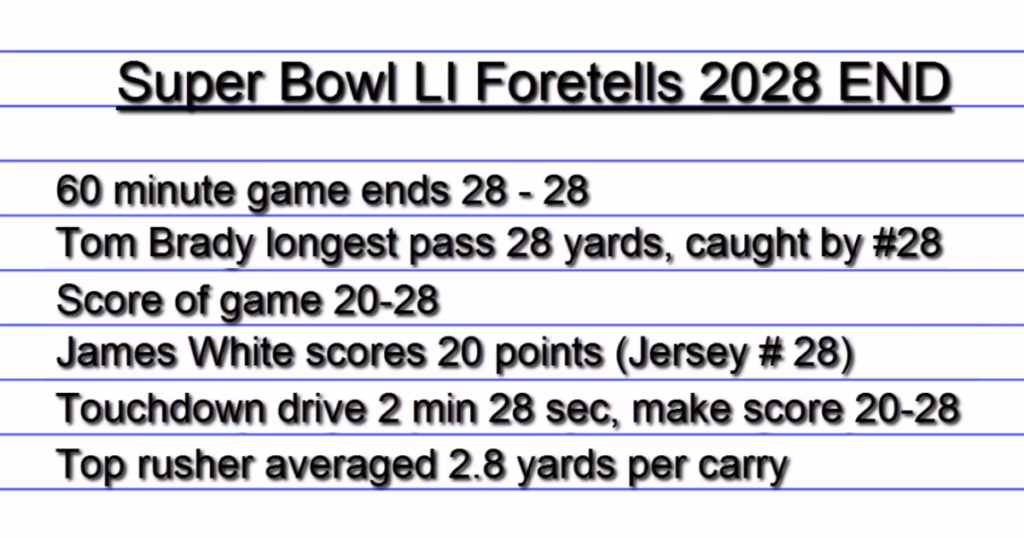