Here’s a fascinating 2028 END confirmation straight out of God’s Word.  It’s contained in the VERY FIRST verse of the Bible (Gen 1:1), which is literally the first sentence of the Bible.

God said in His Word:

This foretold after 6 days (6,000 years) God is going to make an END to His Creation at Christ’s Second Coming.  Literally, He’s going to burn the entire surface of planet Earth with fire as Peter told us:

“The day of the Lord will come as a thief in the night; in which the heavens shall pass away with a great noise, and the elements shall melt with fervent heat, the earth also and the works that are therein shall be burned up.” (II Peter 3:10)

You can learn all these things in our video series, but just understand the Bible tells us … “God DECLARED the END from the BEGINNING,” which was through the Creation story.

Alright, so let’s take a closer look now at the first verse of the Bible, which is literally the first sentence of the Creation story.  Because here’s the deal … I believe not only did God “declare the end from the beginning” through the 7 Day Creation story — that it would be YEAR 6,000 — but I believe He left a clue in the VERY FIRST VERSE of the Bible to when that year 6,000 would arrive on our Gregorian calendar!

“In the beginning God created the heaven and the earth.” (Genesis 1:1)

That’s it!  That’s all it says.  But this is actually a fascinating sentence for it’s claiming from the very beginning of Creation God simultaneously brought time, space, and matter into existence.  “In the beginning” is time, “heaven’ is space, and “earth” is the matter.  And those 3 things make up the world we know today.

But let’s look now at Wikipedia’s page for Genesis 1:1, for it will show how this sentence was originally written in Hebrew. In the Masoretic text it contains 7 words made up of a total of 28 letters!

How about that?  There’s the number 7 again!  Seven Hebrew words make up the very first sentence of the Bible!  Amazing!  Remember, that’s the number God went on to use in the Creation story (7 Days) to foretell His complete plan for Earth. 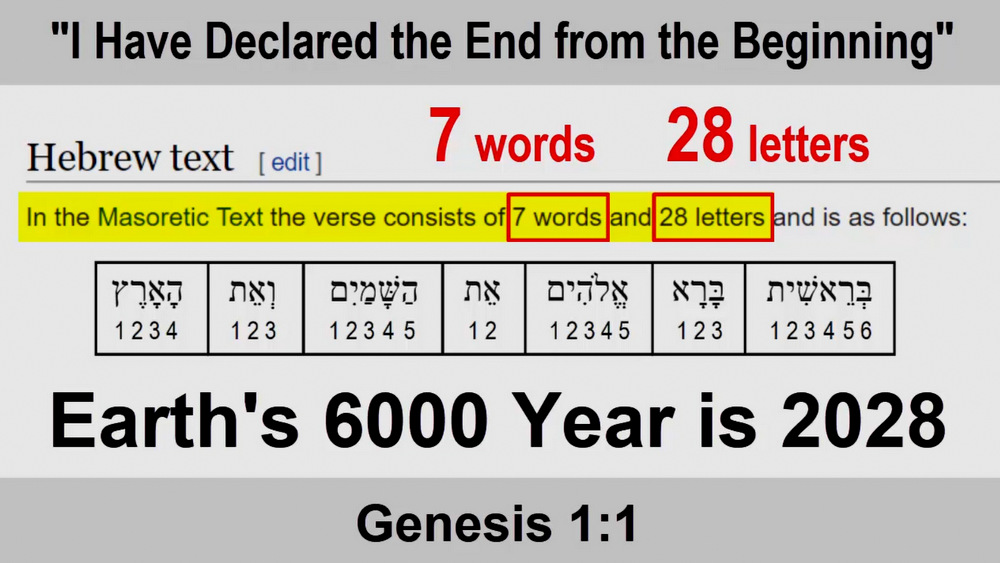 But then we find those 7 Hebrew words are made from a total of exactly 28 letters!  How about that?  Friend, I believe God attached the number “28” to the first verse of the Bible in order to be able to have another way to “declare the end from the beginning!”  Specifically, that Earth’s 6,000 year will arrive AD 2028!  Stunning!

HOW I FOUND OUT

So here’s what this means … if God attached the number “28” to the first sentence of the Bible in order to prophesy 2028 END, this means God knew (from the beginning of time) that mankind would be using the Gregorian calendar at the time of the end (all over the planet), and that on that calendar, Earth’s 6,000 year would turn out to be year AD 2028.  This is all staggering to think about!