“Do not quench the Holy Spirit.Do not treat prophecies with contempt.but TEST THEM ALL; hold on to what is good”(II Thessalonians 5:19-21)

So here’s what happened … the video series took me over a year to create.  You’ll see on YouTube Part 1 was uploaded Oct 12, 2017 and part 10 was uploaded Oct 25, 2018.  I did one part at a time.  I’d script it first, carefully writing out every word I was going to speak.  This would take a week or two.  Then I’d go out to my garage and film myself speaking the message in front of a green screen.  This was done after midnight (1 to 3 am in the morning) because that’s the only time quite enough around here to record.  So once everything was filmed, then I’d get to work the next morning creating the video, which took another week or two.

Finally in Oct 2018 I completed the 10 part series.  But near the end, God had been laying it on my heart to put this series on disc (DVD & Blu-ray’s).  So I immediately started learning how to do this in Nov of 2018.  I found someone locally to do the DVD authoring, and I worked on the cover artwork for the package.  And it’s here that I learned the shocking “2028 END” confirmation God had done!  It’s a miracle so wondrous, so incredible, that I haven’t stopped thinking about it, every day, for the past 4 months!  I can’t get it out of my mind what God did!

So this is how happened … as I was designing the cover artwork in Dec 2018, I had a stack of DVD cases beside me.  I was looking at them, using them to help me decide what belongs on the artwork.  You know, what goes on the front, the spline, and on the back.  And as I got to the back, I noticed they all included the running time for the DVD in minutes, never hours and minutes, but always total minutes.  Like for example, if a movie was 2 hours long, then the running time was written as 120 minutes on the back.

So I was like, “Well cool, I’ll include that, that’ll look nice on the back.”  So that’s when I looked up the times for each of the parts in the 10 part “2028 END” video series, and I wrote them down on a piece of paper.  You can see the 10 parts and their times listed on the left in the image below. 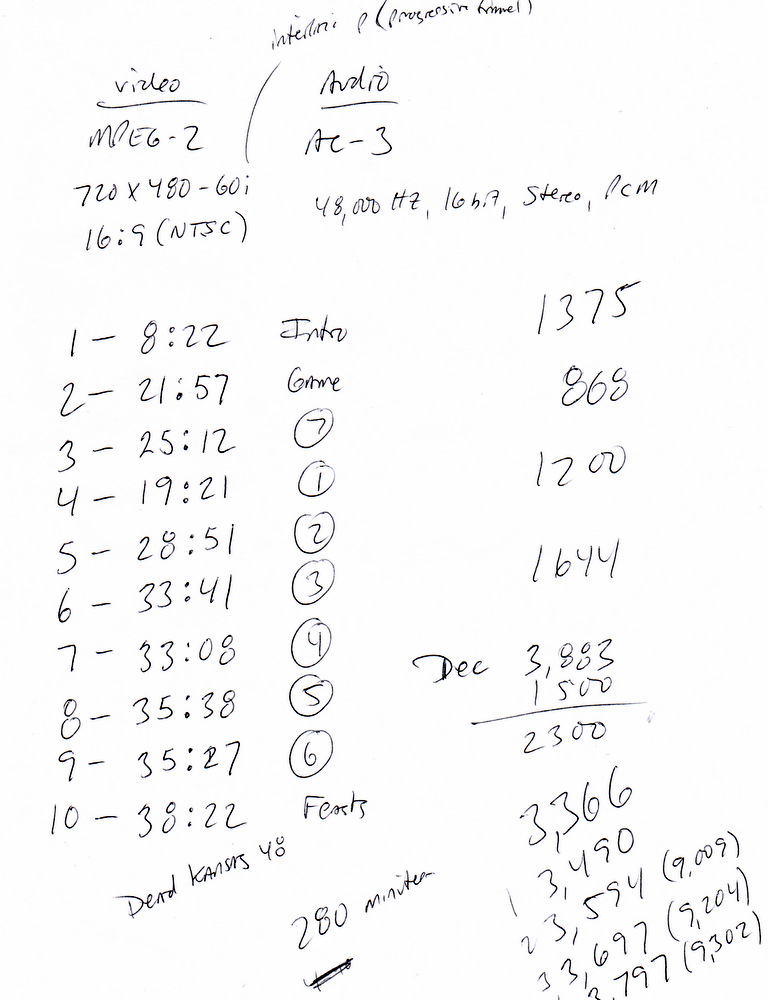 (By the way, just in case you check me on this … you’re going to find these times are roughly 10 to 15 seconds shorter than the times on YouTube (for each of the parts).  That’s because on YouTube you have to leave extra time on a video for something called “end screens”.  This is where you show an image of the next video you’d like people to click on and watch.  So this blank time wasn’t needed for the videos on DVD.  It would serve no purpose.  So in November 2018 I had already re-rendered the 10 parts for DVD.  I removed the blank time, and even added extra sound effects and improved the text and visuals.  So I was done!  I had the exact 10 videos that would go on the DVD … the 10 parts of our 2028 END video series.)

It was like the Creator God stepped down out of Heaven and personally signed the DVD, saying, “This 10 part “2028 END” video series came from Me!  This is NOT Gabriel’s message.  These are NOT Gabriel’s truths!  These are MY truths!  And this is My message!  So listen to it, people!  Hear it!  Don’t despise this prophetic series, but test it.  See if it’s not from Me!”

Well guys, so there it is now, forever written on the back of the DVD package … running time 280 minutes!  You can even see the times for the 10 parts listed on the insert I later created for the inside of the package, which add up to 280 minutes.  They’re also on the menu screen when you insert the DVD or Blu-ray.

And then I awake this past week, early Thursday April 11, 2019 (in the 6 am hour) and God spoke to me about the number 280.  He said, “Gabriel, you recognize the “28” but do you know what the ZERO represents?”  I didn’t know. I’d been thinking about this miracle every day for 4 months, but I didn’t know.  He said, “Gabriel, the “zero” represents “nothing”.  When my son returns I’m going to reduce everything on the surface of planet earth to nothing, just as Peter wrote … “seeing then that all these things shall be dissolved, the elements shall melt with fervent heat, the earth also, and the works that are therein shall be burned up.” (II Peter 3:10-11).  So the ZERO represents this “nothing”.  Nothing left but ashes!  When the end comes everything will be reduced to ZERO!”

After this, I was now compelled to know the EXACT time of the series.  In other words, I knew for the past 4 month that each of the 10 parts didn’t end on the EXACT second that’s listed.  Like part 1 is listed as 8 minutes and 22 seconds … but is that 22 seconds rounded up from 21.8 seconds, or is 22.2 seconds and it’s rounded down?  I wanted to know.  So it came to me that if I re-imported the videos back into my video editing software I might be able to learn the exact times right down to the fraction of a second.  And thankfully, I was right!  My software divided each second into 30 parts.  So I was able to learn the exact time (down to 1/30th of a second) for each part.  And I’ll show you that piece of paper right now, where I wrote them down. 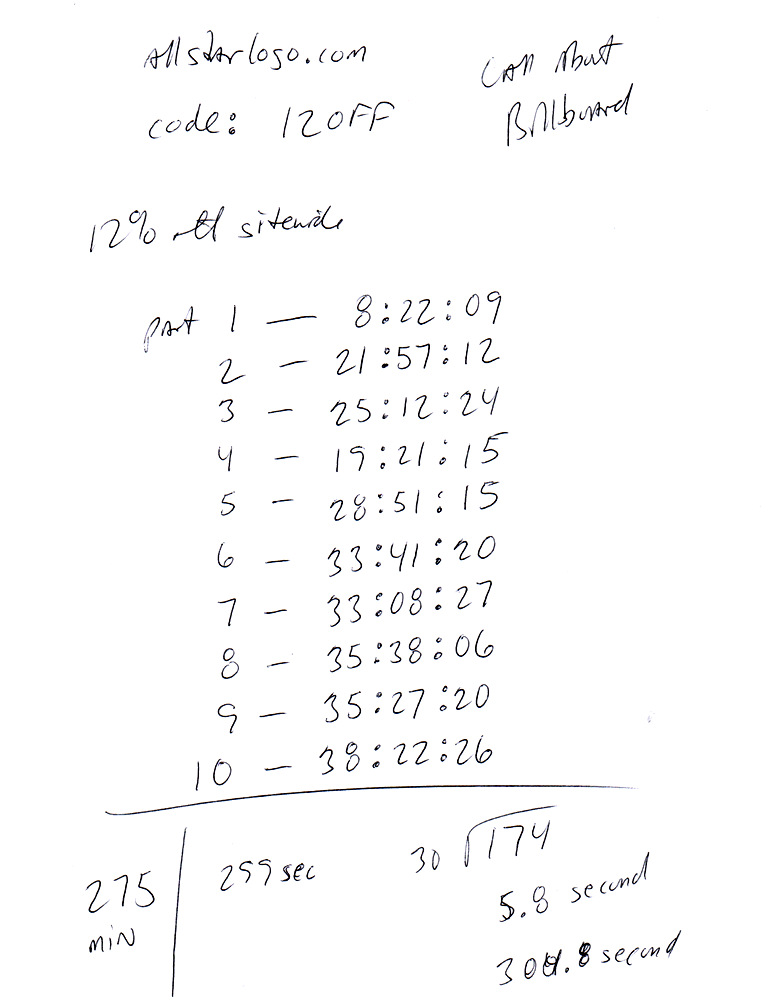 So what does this all mean?  I mean now that we know, without a doubt, that this “2028 END” series came from God!  What should we do?  Friend, it needs to be heard!  Every human being on the face of planet should learn the truths in that series.  It would change the world!  They’d know God’s incredible prophetic truths behind EACH DAY in the Creation story and so much more!  They’d KNOW God exists!  They wouldn’t have a doubt about it.  And then the fear of God would come on them!  So it’s our life’s mission to get this DVD or Blu-ray into every house and church in the world.  People need this message RIGHT NOW!  It’s God’s plan for Earth RIGHT NOW!  Jesus is returning Feast of Trumpets 2028, and people need to know!

So we need your help.  And of all of you can help!  This 10 part series should be airing in your church.  It should be shown in your Sunday School … one part each week, and then discuss it.  Ask you pastor to watch it.  Get him a DVD or Blu-ray.  Watch it in your home until you understand every last word of it.  This way you can talk about it intelligently with others.

The DVD & Blu-ray’s are available in the store section of our “2028 END” website.  You can even get 48 of them for only $200 dollars.  That’s only $4 dollars a piece!  We’re not trying to make money, folks, we’re trying to get this message out!  And if you want more, contact us, because we’re even open to having you order directly from our manufacturer in California, and they’ll ship them right to your door.

Here’s the deal, folks … the day is coming when this “2028 END” message might be banned online.  I didn’t tell you guys, but Facebook banned our “2028 END” website from being shared on their site back about two months ago.  Our website was labeled offensive and was blocked.  I fought it off for now.  But I can see a day coming when this message will be blacked out online.  Maybe even our websites removed.  I’m telling you guys, Satan wants this message gone!  He hates it!  He knows it will make believers out of people if it gets out.  And he definitely doesn’t want the world to know when the end is coming!  He wants you to be caught blindsided!

So here’s the deal … if we have this message on disc, then we have it!  No one can take it from us, unless they steal your disc.  But when the message is just up online (hosted on some server somewhere) they can take it from you.  All they have to do is just block it out, or remove it, and it’ll be gone.

So this is why I really believe God led us to put this 10 part series on DVD.  And if I hadn’t, I probably never would have known the series had a total running time of 280 minutes.  So glory to God for that!  But we need to saturate the world with this DVD & Blu-ray, RIGHT NOW, while we’re still allowed to buy and sell.  These discs need to be in every home in America.

So if you want to help, just contact us.  We’re trying to figure out how to do this.  If you have any ideas, let us know.  God bless.